We are open! Our online appraisal and virtual estate sales services are in full operation.  Our office and gallery are available by appointment. Please give us a call and we can see how we can help you.   (503) 235-0946 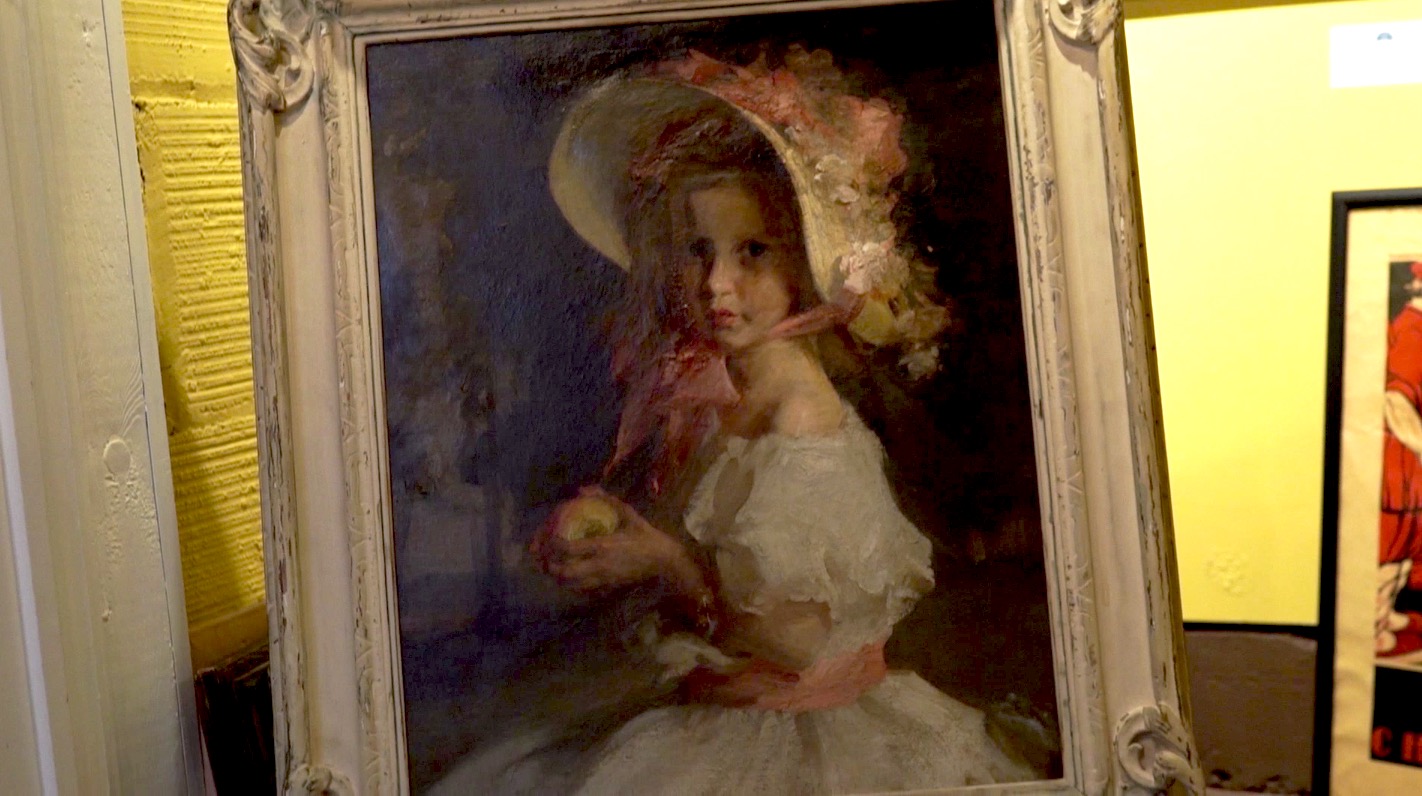 This painting if prefect and pristine would be worth upwards of $10,000.

Hi, Gary Germer here, your antique appraiser extrodinaire here in Portland, Oregon.  And I want to do a little show and tell video with you here today. I want to talk with you about this painting which is right behind me. And talk about why it is valuable; Why it is not valuable, talk about the style, the color and the time period and provenance that makes it what it is today. So, come with me and let’s look at this painting.

This painting is from a local, Portland Oregon Estate Sale. The family had it in storage so they brought it in, they like it and it has been a grandmother’s piece which they did not know a lot about it. They wanted to get a value and perhaps help selling it. I wanted to talk about this painting because it has a lot of interesting thing going for it and going against it so we can show our thought process in figuring out what something is worth.

This particular painting is done by and artist named Louis Betts, now Louis Betts was a portrait artist in New York City at the end of the last century and the beginning of the 20th century, He built up quite a reputation part of it based upon this painting alone. This particular painting helped establish him even further among the wealthy people in New York at the time. It is called “The Apple Blossem” or “The Apple Blossom Girl”.   We don’t know exactly who she is but with the hat and dress we can see how they came up with that title.

She won the prestigious Best Painting at the Carnegie institute in 1909 after which The Friends of the Arts purchased her for the Chicago Art Museum where she hung for many years until after world war 2 when she was deaccessioned and purchased by the grandfather of my client who is the current owner. In the last 20 years she spent her life in storage and they have recently uncovered her in the storage unit and brought out some of the old artwork they had. The was one of the pieces which they did not know what to do with or even much history of it.

So this has one other interesting story I found when researching her, About Betts.  His younger brother was also a painter. This painting caused a lot of interest and a stir because it was so well done and won awards.  His younger brother forged it, painted another one and sold it to a wealthy attorney in Chicago.  Well his brother found out about this and sued his younger brother.  He had to get the painting back and in the lawyer’s office as he was giving the  fake painting back, his sister in law the wife of Louis Betts handed his brother in law a knife and made him cut the fake painting to ribbons. He said “There, I hope you are happy” and she took a piece of the painting, tore it off and threw it at him. And said “If you can’t paint your own work, you should just paint signs”.This is the wonder of the internet, this came from an article in the New York Times in 1910.

This girl has wonderful color, pinks, whites, tans …she has a nice light palate which speaks to today’s decorating and is almost timeless in that way. Most portraits of the period when she was done were very dark and very heavy. This has a really light palate and so that adds to the value as it adds to the desirability of the painting. The subject matter being a young girl.  Portraits generally are not as collected as say, Landscapes and other forms of art are. Although there are people who sole look for portraits.

We are also looking at the problems we have with this and that is the damage which is probably the reason she was deaccessioned as she was probably damaged in storage.  It has been relined and that means the paint had issues and they pulled the paint back on.  Under black light you can see in through here and in through here where there has actually been overpainting which has been done to fil in and restore the painting,.  And they have done a good job, I think she is fine, but you have to take that into consideration because an art collector like a collector of cars, wants one that is pristine and 100% original like it has been garaged, they want a painting to be as original as possible. You will also see here, there are chips here, here and up here that have been done recently, since it has been in storage in the last 20 years.  Those are not a big problem.  Those can be touched up by professional for as not as much money as you might think. That does not affect the value dramatically. But those all are matters of condition, and they do bring the value down, the overall repair work that has been done to it.

Because of the restoration I devalue this one quite a bit and I figure it is probably worth about a third of the appraised price. About $2500 – $3500 range in today’s market also considering you are going to have to put a little more money into it. But it is still a nice painting, if it wasn’t a Betts, if it was just a Nice painting and we don’t know who the girl is and if we did not know who the artist was and we did not have the back story. I would say, Maybe, $800 - $1200.  So the story and the history can really bring up the value of a painting.

I thought this was fun, that she is a pretty girl and we are going to get her touched up and find a good home for her. This is one of the things coming in, we are going to be doing some more videos about things we have coming in also answering questions people send in to us about collecting, about repairing, and cleaning and that sort of thing. So check back regularly with us as we are sending them out regularly and will send you notice if you subscribe

Thanks for watching and I hope to see you again.

Give us a Review

Get notified of future estate sales.